The highlight class of the seventh week of the 2021 Winter Equestrian Festival (WEF) was the $401,000 Lugano Diamonds Grand Prix CSI5*, and Bertram Allen (IRL) was brilliant with Pacino Amiro, owned by Aiden McGrory, for victory on Saturday, February 27.

Riding over a challenging course set by Anthony D’Ambrosio (USA) and Andy Christiansen (ECU) that featured the open water, a triple combination, and two double combinations, five riders found the path to a clear round and advanced to the jump-off out of 40 starting entries.

The first to return for the jump-off were Lorcan Gallagher (IRL) and VDL Cartello, owned by Heathman Farm, LLC. They had one rail down to finish in fifth place in 38.47 seconds.

Immediately following, Allen and Pacino Amiro sped through the course in 35.32 seconds, a time that couldn’t be caught by the remaining three competitors.

“There was no real standard set before I went in because Lorcan obviously had a fence down,” said Allen, “and there were only three coming after me, but they were obviously three very, very good ones on fast horses. I know my guy is fast, and with only five in it, the worst case I was fifth. I was going to give it a good shot, and thankfully it came off.”

In a class stacked with Irishmen, it was Daniel Coyle and Ariel Grange’s Legacy, an 11-year-old Zangersheide mare by Chippendale Z x Bon Ami, who came closest to Allen’s leading time. They were clear in 37.11 seconds to finish in second place.

“Anything Bertram does in the jump-off is usually hard to follow or catch,” said Coyle. “I knew before I went in that was going to be a challenge so I just stuck to my own plan and if it was good enough, great, and if not, there will be lots more. It’s Legacy’s first class under the lights this year, and I always have huge, huge expectations of her.”

Allen and Pacino Amiro, who led the victory gallop during WEF 2 in the Adequan® WEF Challenge Cup, were riding in only their second five-star grand prix under the lights. It was an impressive finish for the nine-year-old Irish Sport Horse gelding by Pacino x NC Amiro, who was also in the jump-off during the WEF 5 five-star grand prix.

“The last grand prix I suppose I was stepping into the unknown a little bit with him,” admitted Allen. “He had never jumped a five star or been under the lights, and he handled it very well. Tonight, I was a bit more confident that I knew that he could do it, so I was just hoping that he was going to be on form. He was even better again tonight.”

Allen has been riding Pacino Amiro since he was seven years old and developed him as a young horse. “He’s a little bit of a special character, and I know him very, very well,” he described. “Since week one he’s gotten better and better, and he is a lovely horse who wants to try his best all the time and learn.”

A total of 44 competitors gave it their best shot over the handywork of Andy Christiansen (ECU) and Anthony D’Ambrosio (USA) in the $50,000 Griffis Residential Grand Prix CSI2* as just eight combinations left all the fences up for a ticket to the jump-off. In the second round, Andrew Bourns (IRL) and his own Darquito proved to be the best over the shortened course, finishing double clear in a time of 38.58 seconds.

Bourns knows his 10-year-old Hanoverian gelding by D’inzeo 6 x Contefino 2 quite well, having bought him with his parents Richard and Deirdre Bourns in Germany as a seven-year-old.

“My plan was to win it and I knew with the girls coming behind me, I had to really move it,” said Bourns of his winning round. “Emily Moffitt, Abigail McArdle, and a few of those other riders, I knew they weren’t going to give it to me easy. Chris Kappler helps me a lot. He’s my full-time trainer and Michael Blake, the Irish Chef d’Equipe, helped me with the jump-off as well. It takes a whole team to come together. I was so happy with my horse today.”

The victory marks the first at the international level and the first grand prix win for Darquito or ‘Dar Dar’ as he’s affectionately referred to in the barn. It’s been a steady climb from the beginning of their partnership with a full team effort from the Bourns Sport Horses team.

“My dad produced him in Europe with his riders first for a year,” said Bourns. “In 2019, I went over to Europe and jumped a few smaller classes, and last year he had a few nice results up to CSI3* level and had some placings in ranking classes. He’s a fabulous horse and probably a barn favorite actually. It’s more for his personality than anything else. He was just right from the beginning, one of those horses we couldn’t leave behind. From the very first moment, it was love at first sight with this horse.”

When it comes to getting ready for the ring, like their riders, some horses prefer routine. Darquito is most definitely one of those horses.

“He’s very, very easy to prepare but you have to do it correct, and it has to be done the same every time,” said Bourns with a laugh. “He’s very fanatical about that. We just make sure he’s not too fresh and make sure he’s feeling well and that’s it, but it has to be done correct. He likes his routine, and he likes his people. It’s almost more important that he has the right people around him than anything else.”

Dermott Lennon has his first win so far at the Sunshine Tour!

The Medium Tour C at 1.45m, was held in the Milton Arena which drained perfectly after heavy rain and allowed the very competitive set of 72 competitors to carry on with their day as usual.

The International Irish rider, who will be well used to rain at home, Dermott Lennon was riding the amazing mare “MJM Pursuit”.  Dermott, is very well respected in Spain and won Gold there in the World Equestrian games in Jerez in 2002.  He was also Individual European Champion in 2001 and needs very little introductions with multiple top trophies under his belt.  The mare is also a prolific winner on the international stage and is an Irish Sport Horse owned by MJM (IOM) Holdings and is by the stallion Aldato.

The class was a 2phase special and Dermot finished the second phase clear, in a time of 31.67s just ahead of the Danish rider, Andreas Schou riding one of the many horses he has brought to the Tour, “Afghan”.  This pair stopped the clock in 31.86s.  In third place was the Dutch rider Kim Emmen. 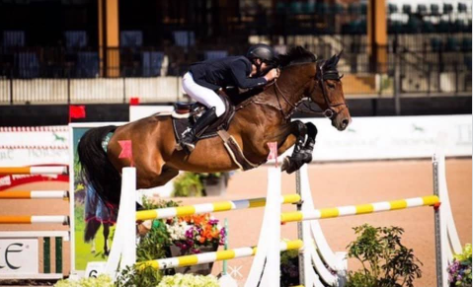