Laminitis is an excruciatingly painful and debilitating condition of the tissues (laminae) that bond the hoof wall to pedal bone. The laminae become inflamed which can lead to detachment of the laminar bonds. In severe cases, this can result in rotation and/ or ‘sinking’ of the pedal bone through sole of the foot. Unfortunately, laminitis is often recurrent for individual horses.

There have been massive steps forward in the study of laminitis in the last 15 years and what has become very clear is that although the clinical signs might be the same, there is more than one cause of laminitis.

What are the signs of laminitis?

Horses that are suffering from laminitis may show some or all of the following signs:

There are many possible trigger factors for laminitis; broadly, these can be defined as:

Horses suffering from severe systemic illness as a result of certain types of colic, colitis, retained placenta, severe pneumonia or starch overload are all at increased risk of laminitis. This is because these conditions all result in the absorption of toxins into the blood, which have far-reaching effects in the laminae of the hoof.

Horses can get laminitis from a mechanical overloading of the limb. Typically, this is associated with a fracture or infected joint on one leg, resulting in an increased risk of laminitis in the hoof of another limb, more commonly the opposite leg which is bearing more of the weight.

Hormonal disorders such as insulin resistance, Equine Metabolic Syndrome (EMS) and Cushing’s disease (pituitary pars intermedia dysfunction; PPID) all increase the risk of laminitis. This is the most common cause of laminitis; up to 90% of laminitis cases are a result of an underlying hormonal disease. Diet can be a trigger factor for laminitis in horses, particularly those with metabolic/ endocrine disorders.

The common link in metabolic and endocrinopathic laminitis is abnormal carbohydrate metabolism and insulin dysregulation. Read more about laminitis and insulin resistance here.

In healthy horses the hormone insulin, which is produced by the pancreas, manages the absorption of glucose into the bloodstream. As non-structural carbohydrates (e.g. sugars and starch), are broken down into glucose in the small intestine, insulin is released and either sends the glucose to cells (e.g. muscles) for energy, or to stores for later use (e.g. as muscle glycogen or body fat)Insulin is therefore key to maintaining a consistent blood glucose level.

Metabolic/endocrine disorders such as EMS can cause the body to have an abnormal response to non-structural carbohydrates. It occurs when the body’s cells start to resist or ignore the signals insulin is trying to send, this is known as insulin resistance (IR). As a result, the pancreas makes more insulin to help glucose enter the cells, causing too much of the hormone to be released into the blood (hyperinsulinaemia). IR is also frequently seen in horses suffering from PPID.

We don’t yet know exactly why IR can result in laminitis, or how PPID and IR may be inter-related, although there are a number of different theories currently being investigated.

How to minimize the risk of IR associated laminitis?

Preventing laminitis is a way of life and very often requires both dietary and lifestyle changes. 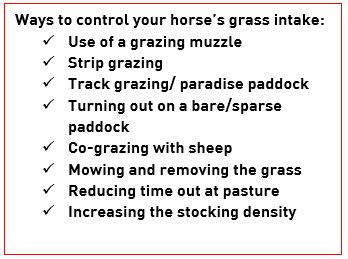 If you are concerned about laminitis in your horse or pony contact our nutrition team for expert, friendly advice on XXXXXXXXXXXXXXXXXX

Equine Metabolic Syndrome (EMS) is a group of symptoms not one specific disease. The more common symptoms include obesity (i.e. BCS of >3 out of 5), abnormal fatty deposits (e.g. a cresty neck), insulin resistance, and laminitis. Specific breeds or types, for example native breeds, appear more vulnerable to it than others.  It’s important to note that not all overweight horses have EMS and EMS has also been found in horses with a healthy weight.

Cushing’s Disease/ Pituitary Pars Intermedia Dysfunction (PPID) is considered a disease of ageing, where the control of several hormones, e.g. Adrenocorticotrophic hormone (ACTH), produced by the pituitary gland is lost.  This leads to excessive hormone secretion from a certain part of the gland (the pars intermedia, as in PPID), testing the levels of ACTH is one way of diagnosing PPID. Thirty-two percent of horses with PPID also have IR, leaving them very vulnerable to developing laminitis. Although, the exact link between PPID and IR is not yet fully understood, but we do know that having both conditions will significantly increase the risk of laminitis.

Hyperlipemia is a severe metabolic disorder. It occurs when a horse has insufficient food and the body goes into a state of ‘negative energy balance’. This results in the body releasing free fatty acids into the blood from its fat stores to try to maintain the function of essential organs.  Large amounts of fat circulating in the blood stream (hyperlipemia) causes other organs to fail (e.g. the liver and kidneys). The result is irreversible and often life threatening.

If you are concerned about laminitis in your horse or pony contact our nutrition team for expert friendly advice.