Showjumping has been treated to a new concept this year with unprecedented prize money on offer. Individual Longines Global Champions Tour riders and GCL teams have fought all season for a place at the inaugural GC Playoffs in Prague. With a heavyweight line up of showjumping superstars qualified, a host of RED MILLS riders are preparing to compete at the new four-day event.

Individual riders have been vying for a prestigious golden ticket to the Longines Global Champions Tour Super Grand Prix – where 16 riders will take centre stage for the ultimate showdown. Top athletes have been competing at iconic locations including Mexico City, Miami Beach, Shanghai, Paris, London and Doha to qualify for the ultimate individual decider of 2018.

The 16 challengers include RED MILLS riders Scott Brash, Edwina Tops-Alexander and Shane Breen. Brash stole the top spot at both Mexico City, with the recently retired Ursula, and London, aboard Hello Mr President, which was his 11th LGCT Grand Prix win, the most of any rider. Tops-Alexander rode Californa to victory in Miami Beach to secure her super grand prix place whilst Breen topped the podium with Ipswich van de Wolfsakker in Monaco to secure the biggest win of his career and his place in Prague. They will face two formidable 1.60m tracks on Saturday night (15th Dec) in the high-stakes showdown, set to test those who have looked on phenomenal form throughout the year.

GCL team fans will also be treated to a brand-new concept, with teams rallying to get through the quarter-final and semi-final stages, as excitement builds for the finals on Sunday in the GCL Super Cup. Team managers have been in intense discussion regarding strategic choices on which riders and horses to field for this event – the first indoor on the LGCT and GCL calendar.

At the GC Playoffs teams can bring up to four riders, and many will be pulling out the big guns. RED MILLS riders Laura Kraut, Bertram Allen, Maikel van der Vleuten, Marlon Zanotelli will all be competing whilst Michael Duffy and Shane Breen will once again be competing for Miami Celtics.

So here’s something a little bit exciting… tickets for the GC Prague Play Offs are now on sale! And @scott.brash has his place in the ultimate showdown in show jumping… who’s coming? Link in the bio . . . #LGCT / Stefano Grasso #showjumping #Longines #horse #horsesofinstagram #instagood #GCPraguePlayOffs #ScottBrash #tickets #awesome #cantwait

A post shared by Longines Global Champions Tour (@longinesglobalchampionstour) on Mar 28, 2018 at 8:15am PDT

Best of luck to all riders! 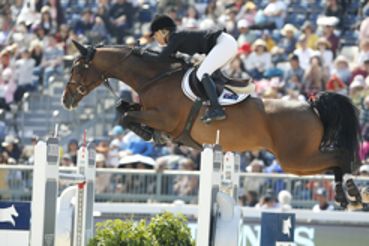